By Natasha Tay.  Ever thought you’d spend two weeks in the bush giving bettongs rave party feet and putting them on a runway for science? I travelled to Arid Recovery in South Australia this past May to do exactly that.

My PhD investigates anti-predator behaviour in marsupials, focussing on how anatomy affects their physical ability to escape from predators. We know that introduced predators are a major threat to our native fauna outside of fenced areas. Critical weight range marsupials (35g – 5.5kg), like bandicoots and bettongs, are especially vulnerable as they are the perfect size for cats and foxes to chomp on. Lots of work in Australia has focused on whether our marsupials recognise cats and foxes as predators, and then trying to teach our fauna to be more ‘predator-savvy’. But recognising a potential predator is only the first step – how the prey species responds to an interaction with that predator will ultimately determine their survival.

Imagine you’re a marsupial and a hungry predator has its eye on you. It’s getting a bit too close for comfort so you decide to flee – but how? You really only have two options: you either out-run your attacker or out-manoeuvre it.

Over the past year, I have been studying the anatomy of marsupials to determine their locomotor ability. I do this by analysing the size and shape of their muscles and bones. To support my anatomical findings, I am recording how these same species move in the field.

At Arid Recovery in South Australia, I released burrowing bettongs and western barred bandicoots down a runway to determine how fast they could flee and what type of path they would take – a straight bolt, or would they zig-zag in an attempt to confuse/out-manoeuvre me (a ‘predator’)?

To track each animal’s escape path, I used fluorescent powder for analysis of foot prints and also filmed the runway from multiple angles. 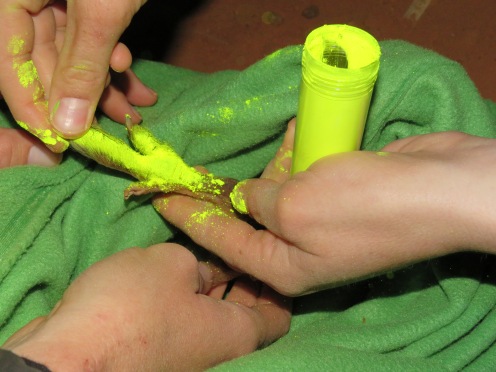 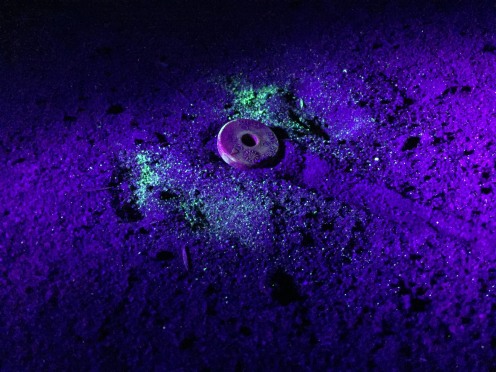 I can now add these escape paths to data on quenda and brush-tailed bettongs that I collected at Whiteman Park in Western Australia earlier in the year. As my PhD progresses, I will be adding more species to my fieldwork list to not only compare with anatomy, but to also investigate differences in escape locomotion between species.

Thanks very much to the staff and volunteers at Arid Recovery who assisted me with fieldwork.