By Ashleigh Wolfe.  The study of urban ecology is a rising topic within the ecological research community, and as urban sprawl increases across the globe, and more and more people are moving to urbanised areas, the need to understand how we as humans impact wildlife is growing. Urbanisation presents novel challenges for wildlife in many forms: through modified resource availability, changed land structures and water regimes, and, of course, the omnipresence of humans.

When you think of urban-adapted animals, chances are your mind goes straight to the taxa that are found in huge abundance around ports, beaches, and central business districts, such as gulls, pigeons, and rats. Or perhaps animals such as dogs and cats that have evolved over time with humans. All of these species are considered ‘urban exploiters’, able to make use of urban areas to such success that they can essentially take over whole areas.

Many species of turtles, lizards and snakes are also commonly found around cities, yet we know little about how reptiles deal with living there. Unfortunately, with such a large amount of unknowns, it’s difficult to simply ‘jump in’ and get going with research.

For my PhD thesis (which I have just completed), I examined how urbanisation affects the natural history and behavioural ecology of the dugite (Pseudonaja affinis, Elapidae) and bobtail skink (Tiliqua r. rugosa, Scincidae).

Dugites are large-bodied venomous elapid (front-fanged) snakes that are common across Perth and Western Australia’s south-west. They are found in a variety of habitats, from beach dunes to dense woodlands (and especially suburban backyards neighbouring bushland patches). Dugites eat a range of reptiles and mammals as prey, and are capable of moving great distances (many km) within their landscapes (but only if absolutely necessary). They are one of the most dangerously venomous snakes in the world, and responsible for a few deaths in Western Australia over the last few decades. However, recovery from a dugite bite is highly likely, provided the bitten patient follow apprappropriate snakebite first aid techniques and seek medical assistance ASAP. Dugites are widely despised by the typical ophidiophobe, but there are some herpetology enthusiasts who love them for their speed, tenacity, and interesting nature. They are excellent animals to work with, and the larger ones (up to 2m total length) are simply stunning when getting up-close and personal – just remember your Personal Protective Equipment at all times!

By contrast, bobtails are one of the largest species of skink, a Western Australian subspecies of the ‘shingleback lizard’ that is so common across southern Australia. Unlike shinglebacks, bobtails are smaller (typically up to ~450g, rather than ~600g), their scales are smoother, and their colouration more diverse depending on their habitats: around sandy beaches, their scales are pale; in woodlands, they are dark brown; and in the Goldfields, they can have yellow/orange/red colours on their chins. Bobtails are common garden reptiles, but are more fondly viewed by the public as the endearing strawberry-eating snail-crunchers, than the fearsome, deadly dugites. Bobtails are found in the same types of habitats as dugites, and also eat varied diets, though mostly composed of plants, insects, and roadkill carcasses.

In my first research chapter, I tested whether the degree of urban adaptation was correlated with specific behavioural or life history traits across 440 reptile species.  Lizards were most likely described as urban adapters – thriving within cities.  Many snakes persist in periurban areas, while turtles/tortoises appear to be largely oblivious of urban development.  There are some similarities in the lifestyle requirements for urban adaptation in reptiles, but understanding the differences between reptiles and other taxa is likely to be important for successful urban conservation and management.

Urban dugites, which are considered one of the best-adapted urban reptile species in Perth, do not follow the typical diet pattern (i.e. exploiting increased food supplementation) of other urban-adapted carnivores.  Larger snakes had larger prey present, a greater number of prey items, and a greater diversity of prey, while urban dugites were relatively smaller (snout-vent length) than non-urban specimens, and females were relatively lighter than males; urban snakes were less likely to have prey present in their stomachs and were relatively lighter than non-urban snakes. The published research paper is available here.

Urban dugites were negatively impacted by translocation.  I studied the spatial ecology of dugites.  Translocation influenced space use of dugites and detrimentally affected their survivorship.  Compared with resident snakes, translocated snakes had larger activity ranges, travelled greater distances, and suffered 100% mortality. The results of this chapter are published in Wildlife Research. 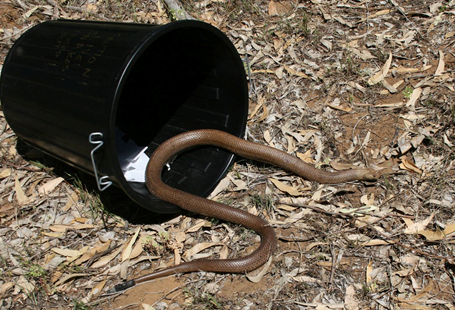 One of our GPS tracked dugites before and after GPS attachment

Being able to correctly identify reptiles may influence the responses of motorists to reptiles on roads, affecting the likelihood of a reptile being killed when crossing roads.  I assessed public attitudes towards reptiles on roads, testing for whether surveyed respondents held high welfare values for animals on roads and/or felt that they were very likely to rescue animals. Following this, I observed motorist responses to model reptiles on a roadside, and then used mathematical modelling to show that crossing roads is risky for reptiles.

I also tested the ability of the general public to correctly identify commonly-encountered reptile species via live displays, and compared the number of correct responses between sexes, ages (adults vs children), and whether the respondent was from a country town or the metropolitan area.  In addition to this, I examined records of snake sightings reported to the WA Wildcare Helpline to identify the most commonly encountered snakes (via public identification, and sometimes morphological description over the phone).  Accurate reptile identification would benefit public health, potentially reducing dangerous encounters between humans and venomous snakes and allowing for correct treatment for snake bites.

Encountering humans in urban areas is an additional source of stress and disturbance for wildlife, and understanding how species respond to encounters can help to reduce negative effects.  I examined the behaviour of bobtails exposed to repeated encounters with humans, and whether they chose to flee from encounters, gape at observers, or ignore them.

Overall, living in an urban area is risky for reptiles, which are detrimentally affected by negative attitudes, persecution from the general public, and constant disturbances.  Both dugites and bobtails appear to lack the behavioural flexibility needed to persist within Perth, and rather mitigate disturbances by minimising interactions with humans.  Current practices of translocation to manage reptiles and ongoing conflicts with reptiles on roads (usually as a result of negative human attitudes) negatively impact urban-adapted reptiles, and education of the general public will help to ensure these species are properly managed to allow their persistence within the urban sprawl.

My PhD thesis is a small step towards a greater understanding of urban adaptation and reptiles, and hopefully forms a stepping stone to help inspire other researchers to continue to pursue this area.