By Stuart Dawson. Last week I attended the Bilby Indigenous Knowledge Festival in Kiwirrkurra to share expertise and findings with Indigenous rangers, landowners, scientists and land managers. These are my unique experiences at this celebration of this important vulnerable species.

As we arrived in Kiwirrkurra, the most remote community in Australia, at 1am, three things struck us. Firstly, the track we had been on for the past 18 hours was not a one-day drive (further rubbed in by the fact that Kiwirrkurra runs on NT time, so it was actually 2:30am). Secondly, after coming from balmy Broome two days earlier, it was damn cold here in the red centre. Lastly, the sheer number of dusty Toyotas spread across the footy oval, and associated swags full of sleeping rangers and attendees, indicated this was not going to be a small affair.

We were at the inaugural Bilby Indigenous Knowledge Festival, a meeting of Indigenous rangers, traditional owners, land managers, and scientists from around the country, to share knowledge and stories, and discuss the future for this vulnerable species. This was not a conference, there were few formal talks, and the program was notional at best. It was a celebration, with half of the first day being taken up by informal storytelling about the ecological and cultural significance of the Ninu (the Pintupi name for the bilby). This resembled more of a fireside yarn than a national meeting of land managers, and that was its strength. Hearing these stories was inspiring, as people who still found bilbies on their land swelled with pride to talk about their ‘pussy-cat’ hunting, and ‘right-way’ fire regimes. And people from areas where bilbies were now extinct explained how inspired they were to care for their land in order to get bilbies back. 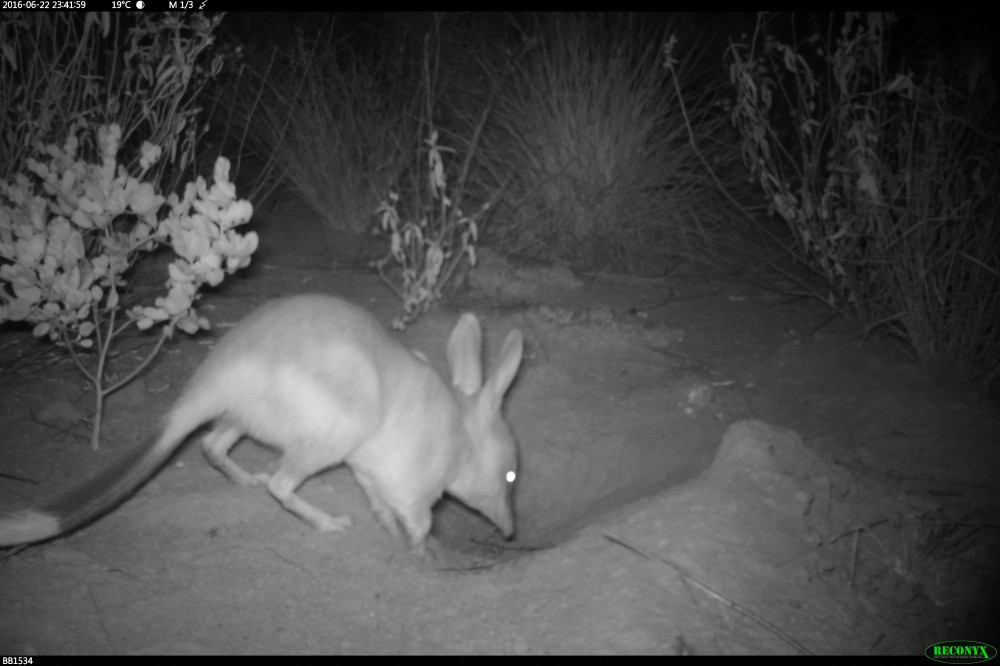 Throughout the festival, we learnt about methods of bilby monitoring, methods of feral animals management, as well as discussion groups about fire management, and data sharing. However, every afternoon the fun began. We headed out on country to practice some of our skills. I was invited to train people in the use of motion sensing cameras, used in my study in the Kimberley, and in many other areas, to monitor bilby burrows. Over the course of the week, I set up 10 cameras and managed to get some nice footage.

On the second day, during the afternoon session, we headed out with some of the older Kirirrkurra residents to track Ninu and cats. Kiwirrkurra has received some attention in recent months for the residents’ skill at tracking feral cats, and humanely dispatching them. The general store has a $100 bounty for each of the cunning little buggers that are killed. Walking through the spinifex with Kiwirrkurra residents Nolia and Matthew gave me a new appreciation for the understanding and attention to detail that many traditional owners have. They could even tell that the bilby they were tracking had a limp! Unfortunately we didn’t find any cats during our time, and the Kiwirrkurra Pussycat Hunting Trophy remains unclaimed.

Indigenous rangers have the ability to drive the recovery of the bilby, not only because 80 per cent of the current bilby distribution is in some way under Indigenous managed land, but because the key threats – feral cats and inappropriate fire regimes – are two factors that ranger groups have the power to drastically improve.

By the end of the festival, we had achieved quite a lot. We had agreed upon, and expressed support for the roll out of a national ‘Bilby Blitz’, where ranger groups from across the country would all survey for bilbies over a one month period every few years, providing a powerful snapshot for government to track the distribution of the bilby. We agreed to start a data sharing conversation, to ensure that people in the right positions had the data they needed to make good decisions, and that the people on the ground could see what their hard work was building towards. Most of all, I believe the biggest outcome of the festival was the enthusiasm and love it fostered among people from over 25 Indigenous nations for this species. I hope that the sharing of stories and lessons will stay with all the attendees, to work hard to keep the cultural significance strong. It is difficult to see how the future of bilbies can be solidified without that happening.