by Bill Bateman & Trish Fleming.   Animals are constantly on the lookout for potentially dangerous situations. Vigilance (time spent observing their environment for danger) is one measure of their antipredator responses. Another is their ‘flight initiation distance’ (simply: FID = how close you can come to an animal before they take off).

We can use FID to tell us about how ‘risky’ animals perceive a situation to be. An animal will remain where they are, if there is low risk. But if it is approached by a more ‘threatening’ stimulus (e.g. more or faster predators), then there is greater risk associated with remaining in that position, and the animal will move away to a safer spot, sooner.

So, longer FIDs suggest animals perceive greater risk, while short FIDs indicate that animals are not really threatened in that situation.

FID and vigilance has been used by many researchers to explore how organisms assess risk and there are many papers out there attesting to the value of this simple metric. We have now produced several papers on escape behaviour in animals ranging from tortoises to frogs, birds, mammals, tadpoles and  grasshoppers.

Soon we will be adding to this: next year we have two review chapters coming out in a book dedicated to this sort of research; one chapter on escape behaviour in invertebrates and one chapter on fish and amphibians.  Reading through the literature it is obvious that the simple metric of FID is a useful tool for all sort of evolutionary and conservation oriented research questions and we hope to do more research in these areas.

One aspect of escape behaviour that has interested us is how animals deal with high levels of disturbance. Think about it – in urban areas, many animals are constantly surrounded by people, and if they treated them all as potential predators they would be forever fleeing from them. To survive alongside humans they have to learn when to ignore them, often using what appear to be quite small, and subtle cues. In South Africa we explored the behaviour of hadeda ibises that forage on lawns and parks in urban landscapes and found that they often ignore people that pass by close by if the people do not look at them, but if will move away from people that are looking directly at them as they pass by.

In New York, in the heart of Manhattan, grey squirrels learn to get on with their lives surrounded by crowds of people by being keen observers of the normal behaviour of people. People that bustle by on the paths with their eyes straight ahead, get ignored by the squirrels, but people that step off the paths (even if they are not closer to the squirrels), or who gaze at the squirrels as they pass by, are regarded by the sharp-eyed squirrels as behaving ‘differently’ and become classed as more risky, such that the squirrels move away from the sooner.  This paper is discussed in the latest Journal of Zoology Podcast. 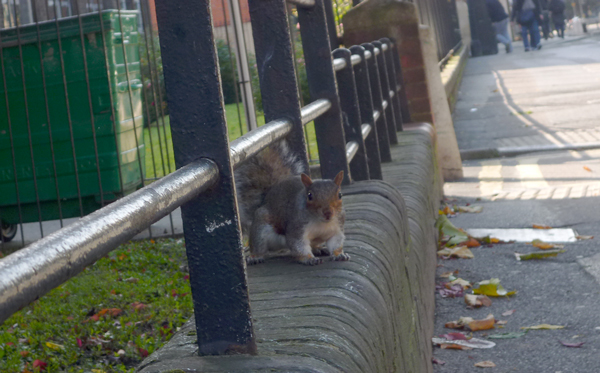 The difference between an organism that can assess a human’s behaviour as risky or not based on subtle cues almost certainly contributes to the success of that organism as an urban adapter, and behavioural adaptations to urban living is one of our burgeoning research areas.