Bandicoots are important ecosystem engineers.  They manipulate and move soil using their strong forefeet and claws (biopedturbation) as they forage for mycorrhizal fungi, invertebrates, tubers and seeds.  For example, without digging mammals to break up the hydrophobic surface crust of the soil and create a heterogeneous surface, plant seeds are more likely to fall prey to seed predators and are less likely to find suitable sites for germination, leading to reduced recruitment (Newell 2008).

The bandicoot species in southwest WA (‘quenda’) play a critical role in ecosystem regulation.  An individual quenda can create up to 45 pits and displace ~10 kg soil/day (up to 3.9 tonnes soil/year) (Valentine et al. 2013).  Their diggings will help to enhance plant health and overall ecosystem function.

A 2012 Community Quenda Survey (carried out by Dept. Parks & Wildlife and WWF Australia) found that predation accounted for 30% of reported quenda deaths, the majority due to introduced mammals (cats, dogs or foxes) (Howard et al. 2014). The aim of this project is to determine whether the addition of refuges for quenda will improve their survival in urban bushland reserves.

Dense, structurally-complex cover is required by bandicoots for protective diurnal nest sites.  Previous studies have found that bandicoots use

We will install different refuge types (e.g. PVC escape pipes or ‘pallet palaces’).  Comparison across sites would allow us to account for variation in the quenda population density, alternative refuge (i.e. vegetation), and variations in predator presence (particularly foxes and stray cats).  We will monitor the use of refuges using camera traps that can be deployed around the refuges and quantifying quenda digging activity.  We will also survey for fox presence (scats etc.). 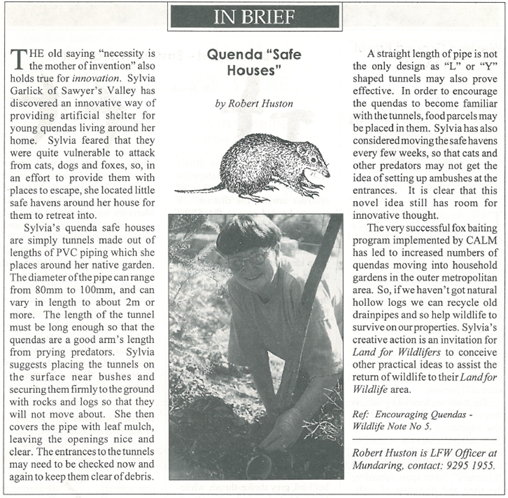